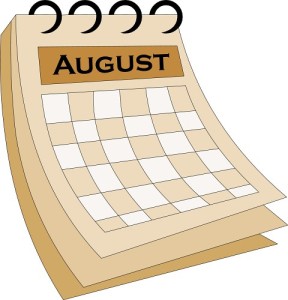 Just when you thought it was safe . . . August hits.

But that was a long time ago. That was back when I still had a whole month off before I had to go back to school. I still had a month to ride my banana-seat, butterfly-handlebar bike (with the basket adorned with colorful plastic flowers) to my friend Linda’s house. A month to take our bikes to West End Park and go swimming in Lake Superior, even though it was cold as ice. A whole month of root beer floats, penny candy from Ben Franklin, playing outside till the sunset late in the evening. Ah, life was pretty much a bowl of cherries back then.

And then “growing up” happened.  And that’s when I started not liking August.

I think the first time it hit me was when I first went away to college. (Maybe I have September to blame, but by the time September rolls around, I start to feel a little better.) That first year going away to college was pretty tough for me. It was only about 4 hours away from home, and I’d been there several times as my older brother and sister went to school there so I was familiar with the campus. And yet when it was my turn to be a student there, it was so not easy. I think I’ve since discovered that I just don’t take transitions very well.

I can remember sitting on the lawn of the student union building amidst my new textbooks and schedules and spiral-bound notebooks and feeling just plain . . . horrible. Like I was never going to “like it here.” I was a small town kid from a small high school and it seemed like everyone walking past me had the air of “I’ve got this” about them. I guess I didn’t know at the ripe age of 17 that people can cover up how they really feel. My emotions sort of hang out there for all the world to see.

Funny – I grew to love my college life eventually. All those wasted tears, watering the grass at the Davies Center at UWEC. (I should really have been paid for the lush grass that surrounded that building in August/September of 1978.) So, you’d think I’d learn that when those “Ugh-ust” feelings come round year after year, to just shake ’em off, as Taylor Swift would no doubt advise me to do. But, alas, they still get to me.

Obviously I don’t have college woes to consider each August anymore. (Yikes – I don’t even have any kids in college any more!) But starting each school year with the kids was a transition, for them, naturally, but for me, too.  A new school year meant new teachers, new schedules to learn, new personalities to get used to, new homework rituals,  new activities. Then, as the kids got older, transitioning to middle school, then high school. And don’t even get me started on how hard Augusts were when you have kids going to college. Thirteen Augusts have been wrecked for me by the thought of another school year with my kid away from me and my ability to keep him or her safe.

So here I am staring another calendar in the face and that word . . . “August” stares back at me. (Yes, I still use a paper calendar, dinosaur that I am.) The same old feelings are coming back. Again, I’m looking misty-eyed back at July like it’s my best friend moving away. I want to call August a bad name and tell it to leave me alone.

Thank heavens for Maria, our daughter. She was born August 22. I wonder if God knew I was going to have issues with August and so worked it out so I’d always have a reason to celebrate that month.

Isaiah 43:19 says, “See, I am doing a new thing! Now it springs up; do you not perceive it? I am making a way in the wilderness and streams in the wasteland.” Notice how there’s an exclamation point after “new thing.” It seems like God is all excited about this new thing He’s doing, like we should be, too. (See above. I like the way things were, you know, like old things.)

August always seems to be a month of new things. For me, it still means setting up a new schedule as I’ve had some time away from piano lessons and other “regularly-scheduled programming.”  Maybe what I need to understand is that today’s “new” is tomorrow’s “the way things were.”  What is uncomfortable and ill-fitting at the moment may be the thing I look back on next August and say, “Awww, I miss that.”

Heavenly Father – Will You help me see this new month with fresh eyes? Eyes that look for blessings and not disappointments? Help me know that You’re in charge of the whole calendar and whatever this new chapter brings, we’re in it together.  In Jesus’ Name – Amen

2 thoughts on “August. What Am I Going To Do With You?”