In many ways, my sister and I are alike.  And in many ways we are different. Since there are eight years between us, we grew up in two different “eras.”  Hers was the era of the shift dress and ankle-hugging pants.  Mine was elephant-bell bottoms and “smock” tops.  High school girls in my sister’s day had short hair with perfect little curls on their cheeks.  Girls during my high school days had long, straight, parted-down-the-middle, almost-in-the-eyes hair.  We all wanted to look like Farah Fawcett.  None of us even came close.  Many was the time my mom made me wear my sister’s hand-me-downs.  No big deal, right?  Lots of little sisters get their big sister’s clothes.  It was a bit mortifying, though, having to wear “peddle pushers” whilst all the other girls were wearing super cool bell bottoms.  My mother was not moved by my mortification.

There are so many instances where my sister, Chris, “Chrissie” to me, and I have either said or done the exact same thing at the exact same time.  It doesn’t really even surprise us anymore. Perhaps the most startling example of this was once when we were in a car together and we both saw a jogger running through a park.  At the same time we both said, “JoGARE.” We were attempting to say “jogger” in French, which, by the way, neither of us speak.  But somehow we both simultaneously thought we’d try and in perfect unison declared, “Jo-GARE.”  I’m writing this phonetically, hoping you’ll get my drift.  Upon further research, I’ve found that the actual translation of jogger into French is “joggeur.”  And I’ve listened to it and it is NOT how we say it.  (Frankly, I like the way we say it better than the real French way. My apologies, France.)

Having both studied music and chosen music-teaching paths, we also can make a song about anything.  ANYTHING.  One summer we planned a surprise party for our brother’s retirement/bicycling trip to Italy.  We sang every planning detail to each other and systematically drove my husband crazy.  To his chagrin, we did a lot of this singing-planning in his presence and he attested to the fact that he was relieved when the party was over and the singing would cease.  Until we found some other mundane activity for which we could commence vocalizing.  If we aren’t singing then we can be found tapping out rhythms on whatever surface is available.  Kitchen counters, tables, car steering wheels and thighs are just a few of the items we’ve converted into drum sets.

So what does this all have to do with Flying Backwards?  Well, we were recently together in our hometown celebrating our mom’s 95th birthday.  We ended our trip with a bit of shopping in Minneapolis at the Mall of America.  My sister can outshop your sister any day of the week!  ……And I’m not too bad at it either.

If you’ve ever been to the Mall of America (MOA) you know that there is an amusement park in the middle.  Yes, a humongous mall with an amusement park in the middle.  This place is HUGE!  Chrissie has always been the more adventurous one.  She loves to travel, I like to stay home.  She wants to zip line across a jungle, I want to zip up my hoodie and sit on the couch.  So you can probably guess who loves crazy amusement park rides and who doesn’t.  She was trying to get me to go on one ride with her, just one. I agreed.  Just one.

I could see her looking with anticipation in the direction of a roller coaster that did a couple of loopdee-loops.  No way.  There was some other horror-machine that took you straight up vertically and then dropped you face down, also quite vertically.  Not ever going to happen.  We decided to walk through the park and check it out.  Aha!!  I remembered a ride I could probably do!  We used to live in the Twin Cities and I’d had my kids there a number of times.  I knew just the thing! 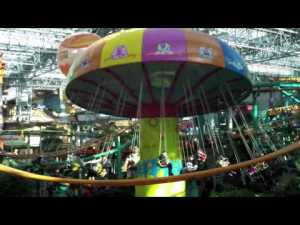 Swings!  I could handle that!  Chrissie said she’d even do something as boring as the Ferris Wheel with me, but thinking that might be too slow, we both agreed to the Backyardigan’s Swing-Along.  Good night.  Two grown women going on something called “Backyardigan’s Swing-Along.”  How embarrassing.  We did notice among the throngs of children, however, there was the occasional adult rider, so we knew it could be done.  We noticed one odd thing about this ride, however.

Some of the swings faced backwards.  Who would want to swing backwards? Not me.

You can’t see where you’re going, for one thing.  Part of the thrill of the ride (can a swing-along be “thrilling?”) is the feel of flying through the air, up above all the other mere walkers on the ground.  We got our tickets and got on the ride right away.  We were at the tail end of a line, though, so we sort of had last dibs on seats.  Ideally, we’d find two together, facing forward.  We’d be able to fly together and maybe even sing about it while we were up there!  I nabbed a forward-facing swing, but the ones closest to it faced the opposite direction.  It’s not like we had all the time in the world to find the ideal set-up; I noticed another forward-facing swing a few swings ahead.  I suggested my sister go grab that one.  She declined and grabbed a backwards-facing one.  “I’d rather be next to you,” she said.

We took our seats, strapped ourselves in and prepared for the backyardigan ride of our lives.  We went up nice and high; it was pretty cool up there, flying.  I know I had a big grin on my face.  If I could choose a super power for myself, I’d choose the ability to fly. Since I’m not counting on that actually happening, the swing-along might be as close as I come.

As we were finishing the ride, it occurred to me that my sister had forfeited not only a thrilling ride but had even given up any chance of it even being fun so she could sit next to me.

Sometimes “I love you’s” can come in unexpected and ordinary ways, liking choosing to fly backwards so you can be by your sister.

If anyone should have gone backwards, it was me.  She was the one wanting the amusement ride in the first place.  But she gave up her thrill of going upside down on a roller coaster and then even gave up the action of facing forward on the swings.  It might not say, “I love you” to everyone, but it did to me.

In many ways my sister and I are alike.  And in many ways we are different.

Chrissie, I want to be next to you, too.

View all posts by Patti Thomas